The core interface provides access to the biomimetic core that runs across the embedded processors P1 and P2. It is summarised in the diagram below. 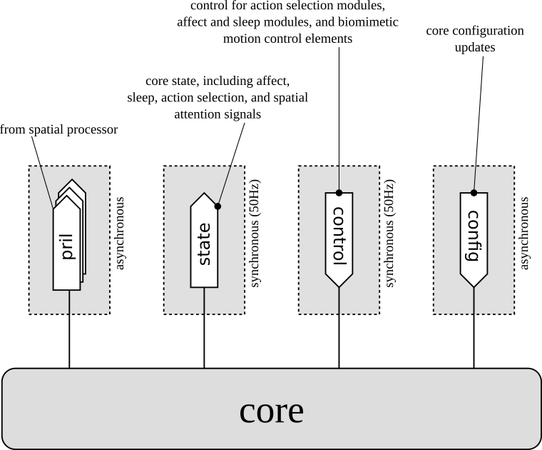 This page describes the signal streams available on the core interface, it does not describe the behaviour of the core in any detail; for this, see the page Biomimetic Core.

Core state is provided synchronously at the hi-rate (50Hz), with a time_usec timestamp. Individual fields are detailed in the table below.

MIRO maintains an affective state which comprises valence (negative to positive) and arousal (low to high), both mapped onto the interval [0, 1]. Immediate events cause changes to the emotion state, which returns over time to the mood state. The mood state, meanwhile, approaches slowly over time the emotion state, so that prolonged emotional excursions drive mood, in time. Alongside, homeostatic pressure builds whenever MIRO is awake, until wakefulness begins to fall and MIRO falls asleep; MIRO will wake again when homeostatic pressure has fallen off again.

At all times, action sub-systems built into the biomimetic core are competing for control of MIRO. Each indicates how strongly it requires control by raising its priority signal. A higher control system can choose to disinhibit any one of these systems by sending a non-zero signal on the corresponding line of the disinhibition signal in the downstream core/control message. If an action sub-system is disinhibited, it will execute its action, taking control of MIRO through the platform signal streams.

The spatial attention system, meanwhile, is monitoring the video and audio streams from the eye cameras and ear microphones for salient events. As each video or audio frame is processed, the most salient location in the corresponding frame is updated, and reported as the priority_peak for that stream. Internally, these priority peaks are key input data to action sub-systems that are concerned with implementing overt spatial attention (such as the orienting action). All detected audio events on the microphone streams are reported upstream, also, in the audio_event signal.

If required, a simple implementation of the GPR (Gurney, Prescott and Redgrave) Basal Ganglia model for action selection can be enabled to run on-board, connecting the upstream priority signal with the downstream disinhibition signal, and closing the behavioural loop. It is this loop closure that constitutes the "demonstration" mode that is used to illustrate the overall operation of the biomimetic core. Developers interested in developing the control architecture can alternatively implement this loop closure in their own software.

Priority map frames are delivered as they are computed, only if the signal SPATIAL_SEND_PRIORITY is set in core/config. Since computation of these frames follows camera frame acquisition, these frames arrive shortly after the arrival of each camera frame.

The three streams are (l)eft camera, (r)ight camera, and (w)ide-field (generated from aural sensing stream). The wide-field stream is computed after the left camera stream.

Downstream control signals can be processed at the hi-rate (50Hz). However, if they are delivered more slowly, they are held over (for up to one second) to maintain a stable control signal to the platform. It is a choice for the higher-level controller, therefore, at what rate to deliver this stream—a rate of 10Hz, for instance, may be adequate for some applications.

If hi-rate control messages are being sent on both Platform Interface and Core Interface, both messages should set flags FLAG_SYNC_PLATFORM and FLAG_SYNC_CORE. In this case, the messages will be assembled and sent down to the platform in the same control packet, ensuring synchronicity of the two control streams.

There are two facets to the core configuration data.

The first is the signals, which are distributed amongst the various modules of the core. These are mostly binary switches, with some event signals scattered around, and many may usefully be changed at run-time. Signals do things such as enable modules, or individual module functions; a few turn on debugging facilities. Since the biomimetic core is entirely disabled by default, a specific signal set will have to be provided if the biomimetic core is to be used.

The second is the model_pars (model parameters) which set includes all the configurable parameters of the core, with the exception of the signals. It is unlikely to be useful to change these at run-time—indeed, it may not prove necessary to change them at all. If different parameters are needed for a particular application, they can be set once when MIRO is turned on. If required, they can be persisted also across power cycles, by passing the flag MIRO_P2_MODEL_PARS_PERSIST when they are sent.