MIRO wants to be a different sort of robot. It's a very simple premise: animals are a lot smarter than today's robots in many respects. Not only that, they are robust, adaptable and good at communicating their feelings—all features that we'd like to see in our robots. So, rather than working out how to develop smart robots from scratch, our approach is to build robots that think and operate very much like animals; from their senses through to their decision-making processes, all the way through to their bodies and their behaviours. 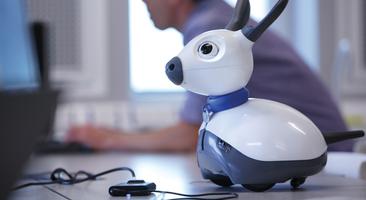 Developed to be emotionally engaging by an international team led by the award-winning designer Sebastian Conran, and experts in biomimetic and 'brain-based' robots, Professor Tony Prescott and Dr Ben Mitchinson from the University of Sheffield, the MIRO platform is intended to accelerate research on next generation animal-like robot companions and provide an accessible route into 'biomimetic' robotics for all levels in the classroom. 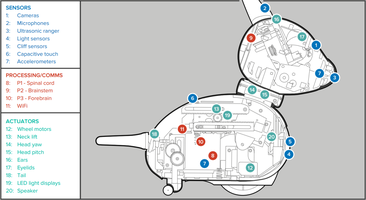 The MIRO platform is built around a core of a differential drive base and a three Degrees of Freedom (DoF) (lift, pitch, yaw) neck. Additional DoFs include rotation for each ear, tail droop and wag, and eyelid open/close. All DoFs are equipped with proprioceptive sensors (potentiometers for absolute positions and optical shaft encoders for wheel speed). An on-board speaker is also available to generate sound output.

Stereo cameras in the eyes and stereo microphones in the base of the ears are complemented by a sonar ranger in the nose. In the body, four light level sensors are placed at each corner of the base, two 'cliff sensors' point down from its front face, four capacitive sensors are arrayed along the inside of the body shell providing sensing of direct human contact and an additional four capacitive sensors over the top and back of the head (behind the ears). Interoceptive sensors include twin accelerometers, a temperature sensor, and battery voltage monitoring.

MIRO's control architecture is based on twenty years of high level research on animal brains and behaviour giving it the first truly brain-like control system distributed across three embedded ARM processors. Interacting with this "biomimetic core" is a quick way to get started down the road of biomimetic robotics. However, MIRO is also happy to be an obedient robot platform, if the application requires it. Through Wi-Fi you can control MIRO remotely and/or stream data from its sensory systems and internal state, or you can install control software on-board to make MIRO entirely independent. MIRO exposes its interface as a ROS (Robot Operating System) node.