This section describes the interfaces exposed by your robot (or simulator) to allow upstream receipt of data from on-board sensors and downstream transmission of command signals for the on-board mechanical actuators and supplementary output and control systems.

There is more than one way to work with a MIRO robot (or simulation), as described under Profiles, which leads to different methods for connecting to these interfaces. Briefly, the ways you can connect to your robot are as follows.

In all these cases, the interfaces exposed are nearly identical (the simulator, for example, provides some /world signals that are not available on physical robots; physical robots, meanwhile, provide meaningful audio data whilst the simulator is not equipped to compute sound propagation). The likely starting point for most developers will be off-board using ROS packaging, as shown in the image below, so we will use this configuration as the basis for the descriptions in this section. Nonetheless, the information in this section applies to all of these cases, packaging details aside. 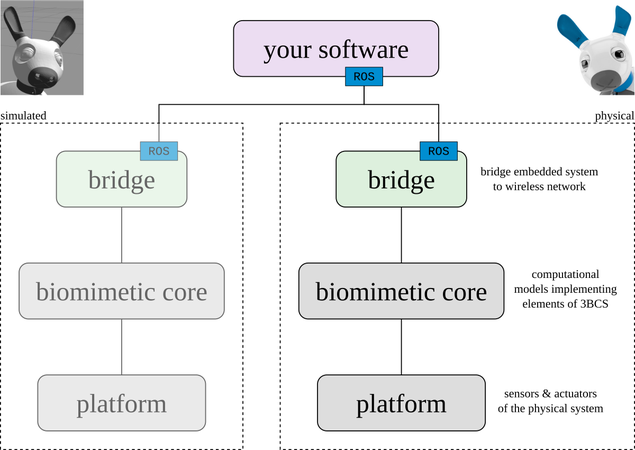 The Standard Interface provides access to MIRO's input and output signals through an interface that is intended to be compliant with standards used by the ROS community. For many applications, this may be the only interface that is needed.

This interface is under development—features not yet available on this interface may be accessed through one of the other interfaces.

The Platform Interface interface provides direct access to the physical (or simulated) robot, its various sensors and actuators, and its supplementary output systems (sound and light emitters). Using this interface you will find MIRO to be a familiar robotic system with familiar inputs and outputs.

For instance, enabling affective expression through the ears will overwrite any control signal sent to the ears over the Platform Interface; enabling biomimetic body control will render direct control of joint angles through the Platform Interface ineffective. The particulars of these relationships are described in detail in the documentation for the Biomimetic Core.

Access to MIRO's faculties is grouped into a number of interfaces